C. W. Henry In The News: Article From The Philadelphia Public School Notebook 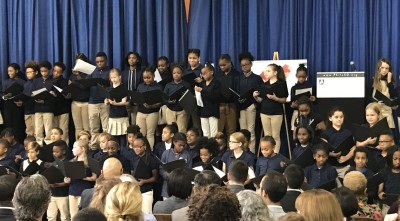 C. W. Henry musicians welcomed guests including Dr. Hite and reporters for an announcement regarding arts in education.  Check out the article below:

Jacob Hernandez first picked up a trumpet as a child, and his father tried to teach him how to play. When he went to Sheridan Elementary School, he was thrilled to find out that he could get trumpet lessons there.

That led to stints in several all-city student music ensembles, to Temple University to study music education (with an emphasis on jazz), and ultimately to what he does now: He goes from school to school to teach brass instruments to students around the Philadelphia School District.

“I can say with certainty that arts education molded me into the person I am today, ” Hernandez said at an event at C.W. Henry Elementary School in Mount Airy.

Hernandez told his story Tuesday at an event kicking off what the District is calling an “Arts & Creativity Framework” that seeks to match the city’s 450 arts organizations and institutions with city schools in a more productive way.

Many partnerships already exist between schools and arts groups, but “we find that we are not leveraging partnerships as we should,” said Superintendent William Hite at the event. Students wanted more opportunities, and teachers wanted more training. Principals needed help with scheduling and training for themselves, and arts partners needed better ways to make school connections.

So the District, with support from the Neubauer Family Foundation, spent 16 months studying existing partnerships and researching what schools and communities wanted.

The framework will not necessarily mean an additional monetary investment on the part of the District, which, Hite pointed out, already spends $50 million on arts instruction and initiatives in schools, mostly through salaries of music and art teachers and supervisors.

“We often encounter a narrative of cutting or eliminating arts from schools. We are excited as a District our overall number of certified arts educators has demonstrated consistent growth over the past five years,” said Hite.

He emphasized that national studies have consistently shown that students who participate in arts and music programs are significantly more likely to graduate from high school.

With resources from Neubauer, the District devised an interactive map of the city’s “arts ecosystem” that makes it easy for schools and arts organizations to find each other and to maximize the effectiveness of partnerships and programming in schools.

The impetus for the initiative came from Frank Machos, the District’s director for music education, and Dan Berkowitz, who had been the director of educational outreach at the Philadelphia Orchestra.

Together, they wondered whether what the orchestra was providing in its partnerships “was really meeting the needs of students,” Machos said.

Joseph Neubauer offered Berkowitz a position at his family foundation to help align the resources and partnerships more strategically.

“Joe was interested in what schools have and what they want, finding what’s out there and how they could be better aligned,” Hite said.

Berkowitz enlisted Martin Ihrig of the University of Pennsylvania’s Wharton School, who specializes in strategy, innovation and entrepreneurship, for help with resource allocation.

“We started out just with music, and the first step was to create the map so that people can better collaborate,” Berkowitz said. “Now it’s not just music, but art, theater, dance. That led to workshops on how to better leverage the resources to better serve schools and students.”

City Councilwoman Helen Gym, long an advocate of arts education, said, “This is progress. … This is a core issue for so many parents and families. There are many things that make people feel it is an unfair school system, and one is if some kids can dance and sing and others cannot.”

Gym’s office had conducted a study of access to instrumental music teachers, like Hernandez. Fifty of the 51 schools that lacked such access had a higher than average percentage of students of color.

During the height of its budget crisis beginning in 2011, the District had cut some art and music teachers, but it has gradually been adding them back. Fourteen additional schools this year gained at least a half-day a week of service from an instrumental music teacher, but there are still about 30 that don’t have access to one.

Now, according to District data, 90 percent of District schools offer at least one arts discipline and 60 percent have both an art teacher and a music teacher on-site.

“I’m very glad the District is embracing an equity framework, to ensure that every school has a quality arts and music program,” Gym said.  “Art and music is state-mandated, and what I’m hopeful about is a real investment with District partners that these programs both exist and are of high quality.”